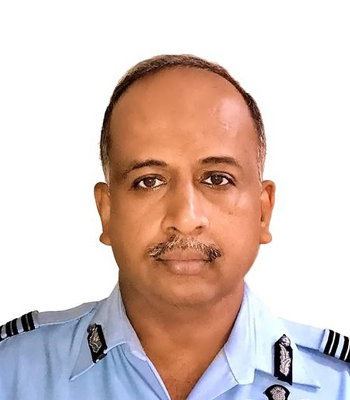 Gp Capt MJA Vinod (retd) Vishist Sewa Medal, Managing Director of M/S AutoMicroUAS , a drone manufacturing and Arial Imagery & Mapping service company . Grp Capt MJA Vinod, was commissioned into the Fighter stream on 13 Jun 92 and retired in 2019. He has flown Mirage 2000, MiG 21, Kiran HPT 32 and Airbus A320 aircraft. He is a graduate of College of Air Warfare, where he did his Higher Air Command Course and earned M Phil & PhD. He is an alumnus of College of Defence Management, a graduate of Defence Services Staff College, Wellington . He trained on airport development & project management from IIM Shillong & on data structures & UNIX, LINUX from IIT Kharagpur. His last appointment was Director Air Defence at Air Headquarters Vayu Bhavan, where he started the Swarm Drone counter Drone work which is taking shape at IAF level. His Swarm drone & Long Endurance drone was conferred with Skoch awards in 2019 He was also the Director during Balakot & surgical strike. He is a frequent speaker on aviation and drones. His drone was adjudged by the IAF as the best innovation of the year for 2018 by Air Chief BS Dhanoa. He started DoJo (Drone Journalism) in India and conducts workshops at Indian Institute of Mass Communication. He has been commended by Air-Officer- Commanding in Chief twice and was conferred with Vishist Seva Medal by the President of India in 2015.